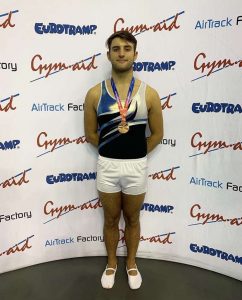 This is the highest level of competition in Great Britain and includes Olympians among the competitors, only the top trampolinists qualify for this event. Ben competed in the 15-16 age group. His two routines in the qualifying round on Saturday saw him into the finals on Sunday in third place.

During the high pressure finals, Ben held his place to finish in a bronze medal position, a fantastic achievement. Not only was this an amazing feat, the score he received places him in the top 20 in his age group in the world, meaning he will now be invited to a trial for the National Trampolining Squad for 2020.

A huge congratulations to Ben and best of luck for the upcoming trials!