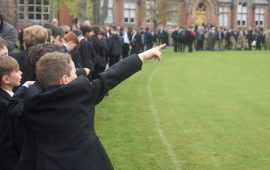 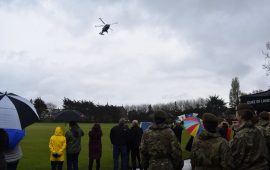 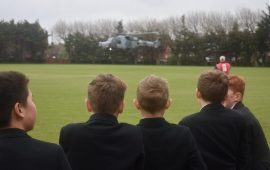 The day was attended by 38 senior North West military professionals from the RAF, Army and the Royal Navy and consisted of a formal inspection of the Schools’ Guard of Honour, which this year was made up of representatives from the RAF section. This was then followed by a review of its cadet’s activities and performances.

Merchant Taylors’ Combined Cadet’s Force was founded in 1915, just a year after the outbreak of World War 1 and is one of the largest contingents in the country, which is particularly impressive given that participation in the CCF is a completely voluntary activity.

One of the main attractions on the day was the arrival of a Royal Navy Wildcat helicopter, flown in by Lt Cdr. AJ Thompson (Royal Navy Air Squadron), a former Merchants Taylors’ pupil whose younger brother, William, also attends the school and is in the CCF Guard of Honour.

The Wildcat is the latest generation of multi-role helicopters, specifically procured to operate from the frigates and destroyers of the Royal Navy. It measures 15.2 metres in length, with a nautical range of 420 miles and a top speed of 157 knots. 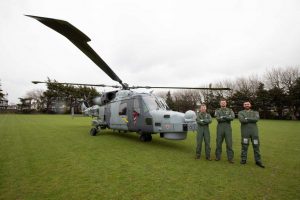 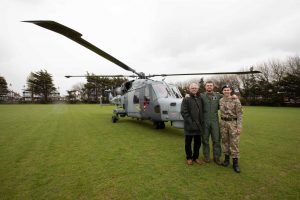 After its arrival, the day kicked into action with a host of activities for the cadets, including an assault course, a demonstration of a section attack and the chance to view the state of the art £35m Wildcat helicopter.

This was followed by lunch at the Boys’ School and then a review of the Schools’ CCF Guard of Honour, by Inspecting Officer, Group Captain John Lawlor, Chief of Staff for the RAF Air Cadets.

Group Captain Lawlor was accompanied throughout the inspection by the Headmaster of Merchant Taylors’ Boys’ School, Deiniol Williams and the newly appointed Headmistress of the Senior Girls’ School, Claire Tao. 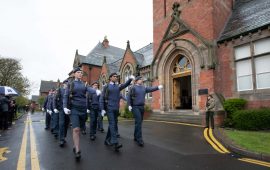 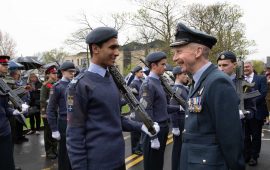 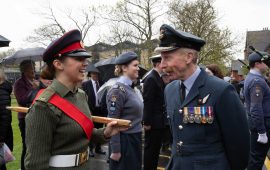 After the inspection, Group Captain Lawlor was escorted around the various activities by the top cadet in each of the three sections and given the chance to meet with parents and cadets before watching all 270 cadets take part in a final parade. During this parade, Group Captain Lawlor also presented the Louis Simpson Memorial Award for the outstanding cadet recruit, which was this year awarded to Cdt. Beth Edwards.

Commenting on the Inspection, Group Captain Lawlor, said: “For me, it was a fantastic day. The cadets battled through challenging weather conditions and made the most of the opportunities that were on offer. Regardless of the rain, their determination and enthusiasm shone through. The number of parents who came to support their children brought an added extra to the day, along with the helicopter which was a fantastic highlight, made even more exciting by seeing old boy Lt Cdr. AJ Thompson fly it in.”

“Having former cadets attend demonstrates the resilient loyalty they still feel towards the school, as they still wish to return to the place their military journeys began and be part of special occasions such as this.” 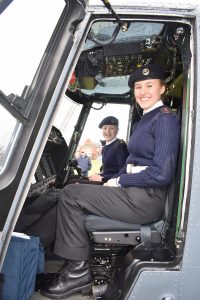 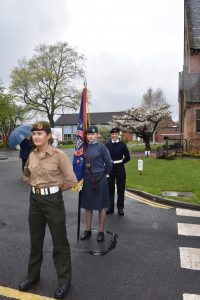 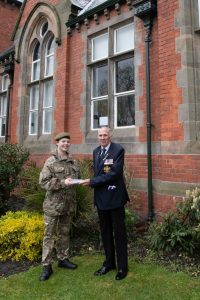 Lt Cdr. AJ Thompson said “It’s been 20 years since I left Merchant Taylors’, so it was a real privilege to bring an aircraft back to the school, as I spent so many years being part of its Combined Cadet Force.

“I was especially proud to be able to share this moment with my younger brother, Will, and see him in the Guard of Honour. The connections to school are so important and I hope we can continue these links in the years to come.”

To complete the day, there was a formal Dining Out dinner held at the Boys’ School for all the Non-Commissioned Officers and special guests. The guest of honour was former Merchant Taylors’ teacher and CCF Contingent Commander Col. Paul Irvine, who is now the Commandant of Greater Manchester Army Cadet Force. This dinner is a celebration of the outgoing Sixth Form cadets, to thank them for all their hard work and commitment during their time in the CCF. Col. Paul Irvine also presented the Roy Bevan Trophy to the Cadet Warrant Officer Charlotte Apel, the highest ranking cadet in the RAF section.

Special praise was also given to year eleven student and cadet, Gabrielle Foster, who presented money she had raised for the Poppy Appeal to representatives of the Royal British Legion, who were also in attendance. 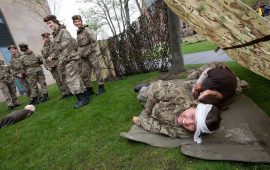 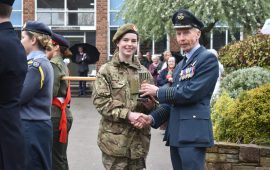 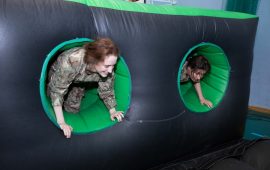 Mr Deiniol Williams said “pupils opt to join the CCF from Year 9, as they can see the opportunities which are made available to them from outdoor pursuits to survival skills. Some will continue with the CCF throughout school, entering a career in the Armed Services. Inspection Day marks the culmination of all that has been achieved by the MTS Contingent since September and it has been fantastic to see the enthusiasm and professionalism of the cadets involved. Huge credit is due to Contingent Commander, Major Helen Irwin and all of her staff.”

“To see pupils rise to the challenge of all that CCF entails and to observe the senior cadets lead with such aplomb is a real honour.”

For the full album of photos for this event, please click here