The Ian Robinson Sports Centre was officially opened in December 2011 by Old Boy and ex-rugby International Ben Kay. Ben was honoured to have been asked to officially open the Centre that is named after the teacher for whom he says was largely responsible for his success.

Ian Robinson, or ‘Robbo’ as he was known to many, taught at Merchant Taylors’ for over 20 years and sadly died whilst accompanying the School’s Rugby Tour to Australia in 2007. 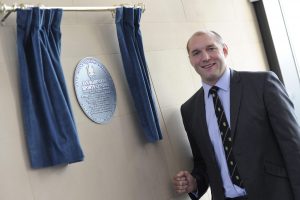