Old Boy of the Schools, Philip Latham has been awarded the Alastair Ross Goobey Prize for overall best performance on the MPhil Real Estate Finance course at Cambridge University. 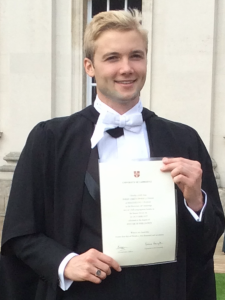 The prize is given in memory of Alastair Ross Goobey – one of the most prominent and respected fund managers of recent times, credited for developing institutional shareholder activism on the London Stock Exchange. After reading economics at Trinity College Cambridge, Alastair joined Kleinwort Benson as a graduate trainee. He was became chief executive of Hermes Pensions Management in 1993 and saw the fund grow to almost £50 billion by the time he stood down in 2001.

Philip received the award for his thesis ‘Euphoria and Despair: The Effect of Exogenous Variables on Residential Property Markets’, after securing cohort leading results in his examinations focused on financial modelling, econometrics, statistical techniques, real estate investment and corporate finance.

Since graduating he has joined the Reech Corporations Group, where under the guidance of seasoned Hedge Fund Manager, Christophe Reech he will be managing an opportunistic Closed End Fund deploying capital into UK real estate development projects.