On Friday last week a group of 30 year 9 Physics students visited the Jodrell Bank Observatory in Cheshire. Its main feature is an enormous 250ft tall radio telescope – the third largest moveable radio telescope in the world.

During the day, the pupils learned about the research carried out by British scientists using this telescope, which includes studying distant stars and galaxies, tracking space probes, detecting meteor showers, and searching for extra-terrestrial life.

The students took part in various activities, which included using banks of lasers, lenses and mirrors to simulate how telescopes detect and focus signals from space. They also went inside the planetarium and were taken on a virtual tour of the cosmos.

Despite the wet weather It was a fun, interesting experience and gave the students a real insight into the exciting space science being carried out by British scientists today. 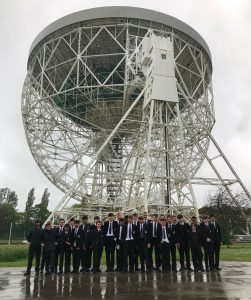