Tickets are now available for the forthcoming Joint Schools’ musical. Bob Carlton’s ‘Return to the Forbidden Planet’ will be staged at Merchant Taylors’ Girls’ School from Wednesday 29th November to Saturday 2nd December at 7 pm.

Directed by Dr John Gill, with music directed by Mr Stephen Newlove and choreography by Ms Louise Edge, this is a hugely entertaining rock and roll ‘Jukebox’ musical based on Shakespeare’s ‘The Tempest’ but totally rewritten with a Sci-fi context and over twenty great numbers such as ‘ Great Balls of Fire’, ‘Good Vibrations’ and ‘Born to be Wild’. With a band onstage, dancers and a large chorus, the cast will tell the story of Captain Tempest’s journey into space on the starship Albatross, his love affair with Miranda and his battle with the monster on the Planet D’Illyria.

Tickets are available online at: https://www.trybooking.co.uk/CRU

Tickets are also available from Pritchards’s bookshop in Crosby village, from Dr Gill on 07784 530562 as well as from both Senior School’s receptions. 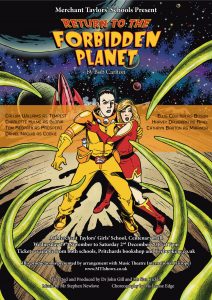