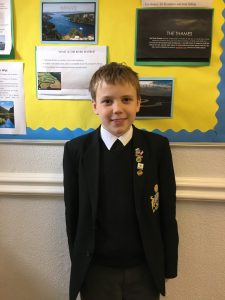 Dedicated swimmer, William, who represents Crosby Swimming Club and City of Liverpool had cause for extra celebration as he claimed first place in the 200m Individual Medley. William saw off competition from some of the best swimmers across the North West, some of which were older than him, to grab first place with a time of 2:56.2.

Even more remarkably, he was only allowed to compete as he turned 10 on the actual day of the competition! Not only did he claim victory however, the result now sees him ranked number one in the UK for 10-year-old boys age group.

William usually trains five times a week and the 200m Individual Medley wasn’t his only victory in the competition, as he also won the 100m Backstroke too. William hopes to one day be able to represent Great Britain in the Commonwealth or Olympic Games and secure a gold medal in the future.

Everyone at Merchant Taylors’ is proud of William’s achievements and wishes him every success for the future!