Merchant Taylors’ School in Crosby is delighted to support a cricket charity campaign set up by one of its former pupils, Mark Edwards. ‘The response from our school community, as well as further afield, has been remarkable’ said Headmaster, Deiniol Williams. ‘People have been dropping kit into us since they read or heard about the campaign in October and we are extremely grateful that so many have got behind us’.

Mark recently lost his life, following a short illness, and his old school wanted to support his legacy to collect as much cricket equipment as possible to send to rural areas of Sri Lanka.

Mark, a very keen cricketer, was appalled to see how school children in Sri Lanka had to exchange kit in the middle of the ground to enable the next player to go in to bat. His wife, Anna, remembers that ‘one particular school that Mark visited had only two bats, two sets of pads and one helmet to share between all of its players. This school was about 3 hours from Colombo. Mark was passionate about cricket and that passion started at school. He would be delighted that more school children in Sri Lanka will now get the chance to play the game thanks to such generosity from the public’.

Merchant Taylors’ has been helped in its campaign by Mark’s old firm, Allport Cargo Services, who have agreed to transport the cargo to Sri Lanka at no cost. The Foundation of Goodness charity will then work with Mark’s good friend and colleague, Sujan Malawana, to ensure the kits gets to where it is needed most.

Simon Sutcliffe, Head of Cricket at Merchant Taylors’, took a group of 12 pupils to Sri Lanka during half term last October where they were able to test themselves in a different country and climate. The visiting group from Crosby were also able to take the opportunity see the important work that Mark’s project is doing. Mr Sutcliffe said: “It is important that players are properly equipped because, to be blunt, being hit by a hard cricket ball hurts. After buying a pair of leg pads, batting gloves, helmet and abdomen protector there would not be much change out of £100, not to mention the bat itself, so imagine how difficult it must be to source protective equipment in poor nations, or poor areas of rich nations. That is why this campaign is so important”

Mark, who was a pupil at Merchant Taylors’ from 1984 to 1991, loved cricket and played for the school’s first team, as well as Northern Cricket Club in Crosby and also the Hong Kong Cricket Club after he moved there with his family. 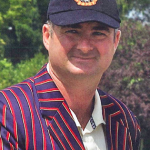 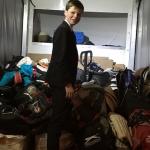 Pupils get behind the campaign to help load up the donations.