Our Classics department has a history of excellence and we are proud to be one of the few remaining schools in Merseyside to still offer the full range of classical subjects: Latin, Greek, and Classical Civilisation.

We believe in the fundamental importance of providing pupils with a traditional classical education providing a solid foundation for further studies, whatever they may be. The unchanging structure of a classical language helps students in studying and comparing modern languages and a knowledge of Latin is an excellent basis upon which to learn other languages.

Latin is a very exact and methodical language and its study allows students to hone transferable analytical and problem-solving skills. We try to keep teaching styles varied to appeal to different learning styles; methods are generally innovative and forward-thinking, although there is still much emphasis on the importance of learning essential grammar rigorously.

The department is keen to encourage pupils to see the importance of studying the past as a means to understanding the present, and to this end we run regular Classics trips abroad.

As an introduction to the classical world, Year 7 boys study both a story-based version of the Trojan War and then begin the Latin language using the popular Cambridge Latin Course from the summer term onwards and throughout Year 8.

Aside from developing linguistic skills, pupils gain an insight into the Roman world and explore aspects of Roman society and culture in Pompeii & Roman Britain.

Latin becomes optional in Year 9 alongside other classical options, Classics and Ancient Greek. Classics requires no ancient language knowledge and involves the study of myth, history & literature, while Greek is a challenging option and is aimed at boys who have already demonstrated a real aptitude for Latin.

GCSE Latinists explore one of the most fascinating periods in history – constant war, the pioneering engineering and technology of the Romans, slave revolts, gladiators, political intrigue and deranged emperors.

Students are introduced to some of the best literature the world has ever known and the breadth and scope of the subject serves to enrich a student’s education and enhances their study in many other academic disciplines, whether humanities or sciences.

By studying such an exact and logical language, students learn about English grammar, develop sophisticated linguistic and analytical skills and broaden their vocabulary base (in both Latin and English!) while honing transferable skills such as problem-solving and attention to detail.

GCSE Latin consists of one language and two literature papers. There is no coursework element and no translation from English into Latin. Students are issued with a vocabulary list of approximately 450 words which need to be learnt for the language exam; all other words are glossed for them.

Two set texts are studied (one prose and one verse) and 50% of the marks in the exam are allocated to questions testing understanding of these works. The rest of the marks are given for translation and comprehension questions of the sort which are familiar from school exams.

The Classics department uses a variety of resources as well as modern technology to bring the subject to life and get desirable results.

The quality of what the Greek world produced – in drama, philosophy, history, art, architecture etc. – is exceptional, and the study of it is of equally great value.

The GCSE course is directed towards reading and comprehension and comprises study of two set texts which introduce pupils to literary masterpieces by the likes of Homer, Herodotus and Plato.

Students experience elements of the culture, language and social life of the Greek civilisation which has inspired many later generations. Knowledge of the Greeks’ achievements is a tremendous help to an understanding of European culture in general; according to Keats, “we are all Greeks.”

Assessment at GCSE consists of three papers – one language and two literature papers. A prescribed vocabulary list of just over 350 words needs to be learned for the language papers; it tests memory skills and expands knowledge of English vocabulary, particularly scientific vocabulary, which is largely derived from Greek.

Students detect similarities between Greek and Latin and studying both languages in tandem reinforces their awareness of grammar and syntax. The freer, more nuanced Greek requires sensitivity to language, style and tone; it encourages creative thinking within strict parameters.

Mastering this language is an impressive indication of academic ability and the sheer rarity of this subject also marks out students to future employers. Standing out from the crowd is a definite advantage in the current educational climate.

The Classical Civilisation course deals with the literature and history of the Greeks and Romans entirely in the medium of English. No knowledge of a classical language is required; however, there are a myriad of technical terms in both Greek and Latin which students need to be comfortable with.

The course is open to all students and often attracts those with interests in literature, art, history or drama. It offers a broad introduction to this fascinating subject to those with no previous knowledge, and also to those who already have established an interest in the classical world.

There are two broad components, each with a wide range of topics available to study over the two years. Integral to this course is an abundance of visual material, rather than just the written word, ensuring the exploration of the classical world is far wider than simply studying literature in ancient texts; it will encompass art and architecture too.

Unit topics include Myth & Religion, dealing with the gods of both Greece and Rome, and heroes, such as Herakles, who visited the Underworld and Theseus who slew the Minotaur. Students also learn about ancient attitudes to death and burial and how they practised their religion through festivals, sacrifices and building temples.

The world and works of Homer are also covered, including a chance to study the mysterious culture surrounding the tales of Homer about the heroes of Troy, the Mycenaeans, which features plenty of history and archaeology.

The course is taught with up-to-date, modern resources and encourages pupils to develop critical and evaluative skills which will equip them for a wide range of A Level courses.  Assessment is by two separate exams at the end of Year 1, each worth 50%.

In Sixth Form, Latin and Classical Civilisation are offered as A-Levels, both following the OCR specification.

Classical Civilisation teaching is shared with the Girls’ School; the co-educational learning experience fosters a diverse and varied range of opinions on topical issues when studying literary texts.

While those wishing to study Latin must have taken the subject at GCSE, there is no prerequisite knowledge required for Classical Civilisation, although a GCSE can be helpful.

Latin at A-Level follows the same broad pattern as it does at GCSE, with a mixture of language and literature.

The emphasis of the course is on reading, understanding and appreciating the literature of the Romans in its many forms and students read two set texts; poetry by Catullus and Cicero’s Pro Cluentio. There is no writing of Latin required in any part of the course.

The extensive study of literature of different genres allows students to develop sophisticated grammatical, historical and literary criticism skills, and to reach into the heart of the ancient world through sublime literature. It also fosters skills such as the ability to analyse, to defend an opinion, to argue, to present views, to write articulately and deal with complex primary sources.

Students are invited to take part in a number of competitions which run annually such as the CICERO international competition, the Latin and Greek reading competition and numerous essay competitions offered by the various colleges of Oxford and Cambridge.  We also take advantage of lecture days hosted by Manchester and Liverpool Universities, Sovereign education days and theatrical productions of relevance in the local vicinity.

Literature and ancient history are at the heart of the A-Level course.

Students study epic poetry (Homer’s Odyssey and Virgil’s Aeneid), philosophy and Greek art and architecture. Students will be expected to study, discuss, think about and form judgements on the works on the specification. An appetite for reading and for seminar-style exploration is welcome and we encourage lively debate.

There are also regular extramural activities including theatre trips, university lectures, competitions, museum trips and exposure to artefacts from the classical world. 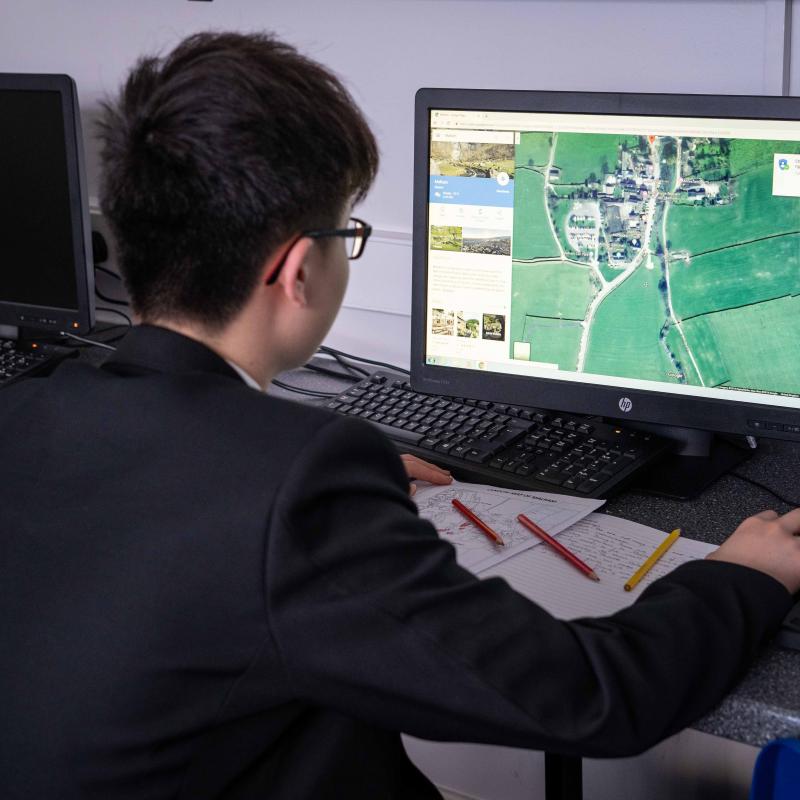