The History Department aims to ensure that all boys develop skills of critical thinking, incisive analysis, effective oral and written argument, reading between the lines, essay writing and more.

History is not simply a dry series of dates and events, but an ongoing process of investigation, analysis, selection, debate and writing. Teachers with a genuine passion for their subject bring History to life using a wide variety of teaching styles to help different students learn in different ways.

It is this process which inspires inquisitive, challenging, and analytical minds to pursue the subject through the school and beyond, with many students going on to study History at university, including Oxbridge.

Boys can expect to be presented with ideas or questions of a challenging nature in every lesson and the department holds the prestigious Historical Association Gold Quality Mark in recognition of its innovative curriculum, outstanding results and community impact.

Our principal aim in Year 7 is to enable boys to enjoy the study of History for its own sake, and to make it relevant to the world in which they live, beginning the building of a lifelong interest in the past as it relates to the present.

By asking a series of stimulating questions and using a variety of teaching methods, the department aims to develop a range of wider skills, such as cognition, collaboration and confidence, and to put in place historical skills and understandings that will enable all boys to think like historians.

Specific skills developed during this year include an understanding of chronology and sequencing, continuity and the pace of change, the link of cause and consequence and the use of evidence, as well as developing the use of broad historical terminology such as democracy and monarchy.

In Year 8, pupils continue to build up layers of understanding of British and World History through the study of interesting questions which help them to explain the world in which they live and explore the wider nature of society and how it has developed, covering topics such as a liberal democracy and the threat of terrorism.

Attributes such as aspiration, articulacy and accountability are developed during Year 8 alongside specific skills including the use of ICT in History and the ability of pupils to summarise and condense information and re-write in their own words.

The Year 9 course looks ahead to the challenges of GCSE History through the exploration of questions such as and “Why did 200 million people die as a result of war in the 20th century?”

Boys are encouraged to develop core attributes such as enterprise, expertise and effort, with study providing a platform for them to think and speak for themselves around open-ended questions of interpretation. Building on existing skills in the study of history in previous years, they also learn about the interpretation of history and recognise that there are no definitive reasons for why certain events unfolded.

Apart from being an interesting, fun and dynamic conversation with the past, History is vital in a world full of opinions and teaches us to read through lies and propaganda and search for the truth.

If you have a GCSE in History, it tells people certain things about you; namely, that you have acquired a wide range of skills that can be applied to many situations. These invariably include being able to understand what motivates people, what they think and feel; the ability to gather, read and evaluate different kinds of information; you can read maps, graphs and other diagrams; you are able to communicate clearly and have learned to express yourself verbally and on paper.

We study the Edexcel 9 – 1 GCSE specification, which gives students a fascinating range of topics to study and provides an excellent platform for study at A Level. It is a subject which is accessible to all students while potentially challenging and stimulating for those pursuing the top grades.

There is no coursework or controlled assessment and all assessment is made by three papers at the end of the two-year course. Topics being studied may include:

History is a thriving A-Level subject at Merchant Taylors’, taught by four passionate and enthusiastic subject specialists. In recent years there have been a significant number of students moving on to study History at university, including Oxbridge colleges.

Boys study a variety of historical periods and ‘types’ of history, whether it be social, political, economic or cultural. A Sixth Form historian is likely to find themselves analysing everything from religious or political reform to modern cinematic masterpieces.

The department runs two options in Lower Sixth. One examines the development of democracy in 19th Century Britain as well as gaining an international perspective in a study of the unification of Germany. The other route combines an in-depth study of the Tudor period with a study of the German Reformation led by the protest of Martin Luther.

In Upper Sixth, all students complete coursework on an aspect of the Nazi regime and study a course in the history of black civil rights in the USA from the American Civil War to the election of Barack Obama.

The department has a proud commitment to extracurricular enrichment. Sixth Formers will lead the History Society and an array of visiting academics has provided a rich and varied diet. There are regular trips to conferences and promising historians are encouraged to enter and are tutored for prize essay competitions, often run through Oxbridge colleges, and Extended Project Qualifications. 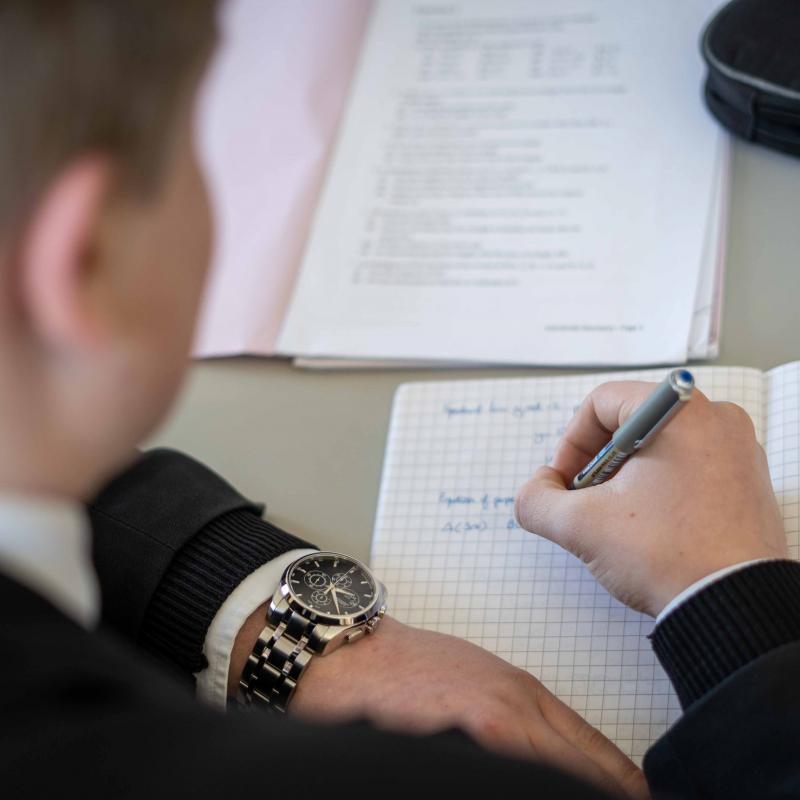