We are proud to announce that our CCF RAF Section has won the Royal Air Squadron Trophy (RAST) regional final for the second year running.

The section held off competition from 13 other schools and will now travel to RAF Halton in March 2023 to compete in the RAST national final, where the cadets will hope to better last year’s position of fourth. This year, our team excelled in almost all disciplines, including wins in the Command Task and Aircraft Recce, where Cpl Blagborough and Sgt Loftus achieved 100% scores. The section also came second in Drill and RAF Knowledge, third in First Aid and fifth in Shooting.

To add a final jewel to the crown, cadet Flight Sergeant Scott-McCormack was promoted to Cadet Warrant Officer, the pinnacle of her cadet career, by none other than Group Captain Roger Simon, Regional Commandant Wales and West Region.

Sqn Ldr Helen Dipple, OC of the RAF Section, said: “As their commanding officer, I am so proud of what the squadron has achieved. Behind this marvellous result is their tireless and commendable attitude to training. Although CCF is only once a week, the team have given freely of their time three times a week, including all day every Sunday, often perfecting their skills with good humour and a sense of pride in themselves, the RAF and ultimately their school CCF.

“The trophies and shields adorn the CCF office and we will soon need to have the shelf strengthened, particularly if the team win the RAST final in March.” 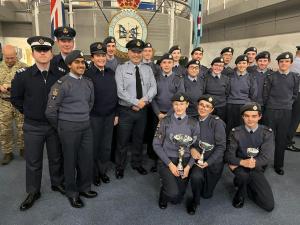